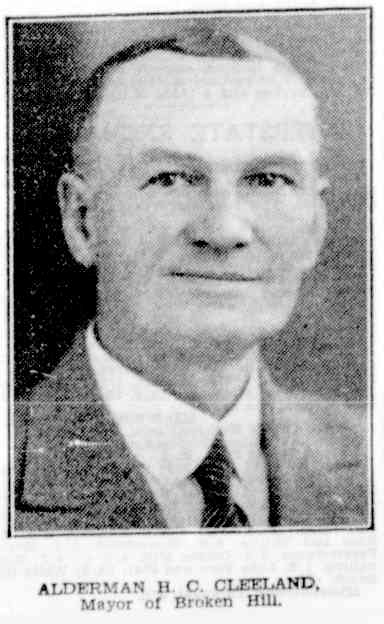 His attestation papers have "Deserted 19 Jun 1902" scrawled over the top. He appears to have joined in 1900 (the handwriting is hard to read). His medical report is dated March 30th 1900. The report lists his height as 5\' 10", his complexion as fair, eyes as brown and hair fair. His religion is listed as CofE. The report says he has a scar on his right shoulder.

"1st Witness. No1056 Sergeant J L Smythe, No 2 company, Victoria Regiment, Royal Australian Army, being duly sworn states :-
At Victoria Barracks Melbourne, on the 19th June 1902, I was Orderly Sargeant. No 1223, Pr H. C. Cleeland VRAA was on leave till [unreadable] to the company sargeant Major on duty. No 1223 Pr H. C. Cleeland has not since returned and is still absent without leave from his Commanding Officer.

"Declaration: The Court having carefully considered the evidence declare that No 1223 Pr H. C. Cleeland No 3 Victoria Regiment Royal Australian Artiller absented himself without leave from his Commanding Officer on the 19th of June 1902 and that he is still absent and has not since returned. There are no deficiencies in his kit."

Alderman H. O. Cleeland, who was last night elected Mayor, to-day took over office from Alderman Dennis, the retiring Mayor, who was at the Town Hall introducing the new Mayor and

clearing up business. One of the first to congratulate Alderman Cleeland this morning on his elevation to office was Mr. M. A. Davidson. Minister for Public Works.

Alderman Cleeland was born at Epp- ing. Victoria, and carne to Broken Hill in 1902 for a holiday, but decided to stay. He obtained work underground at the South mine, but was only in this job six months when a water famine caused the closing of the mines. When tho British mine reopened after the famine he obtained work as a mill hand with a promise to be worked in at his trade as a carpenter if oppor- tunity presented itself. He eventually

got work as a carpenter and has been following his trade ever since. He served for three terms as president of the Carpenters and Joiners\\' Society, and represented that society at the 1925 conference in Melbourne with the Mining Managers\\' Association in re gard to wages and conditions. He has represented his union on the B.D.A.A.L.P. and on the Industrial Council. Alderman Cleeland has ser red in the Council for four and a half years, and has represented the Coun cil at three Local Government Asso ciation conferences.

Shortly after 10 o\\'clock last night, a four roomed wood and iron house sit- uated in Argent-street North, was to- tally destroyed by fire.

The owner and occupier of the prem- ises; Mr. Henry Cleeland, was opening a window in one of the rooms when he accidentally upset a kerosene lamp and caused the fire.

The Central Fire Brigade under D. O. rainborn was quickly on the spot, but it was found that the scene of the fire was outside the reticulation area. The private house fire service of the manager of the Junction North, how- ever, proved a valuable aid in tho em- ergency. This was brought into use, and the flames were extinguished. An adjoining house was, for a time, men- aced, but escaped damage.

The death occurred at the Hospital this morning of Mr. Henry Charles Cleeland, of 700 Argent Street.

Mr. Cleeland was well known in civic and industrial circles.

He served for 17 years as an alderman and was Mayor for two and a half years.

He was a member of the Building Trades Union and delegate to the Trades Hall Trust and the Barrier Dis- trict Assembly of the A.L.P. He was also a member of the Loyal United Brothers M.UJLO.O.F. Lodge.

Mr. Cleeland was a vete- ran of the Boer War and World War I. and was a member of the Returned Soldiers\\' League.

Born at Melbourne, he came to Broken Hill as a young man and worked at the British Mine. After 18 years he transferred to the North Mine, and later .work- ed for Haunstrups Ltd. He retired two and a half yean ago.

Requiem- Mass for the re- pose of his soul will be cele- brated on Monday morning at 7 o\\'clock at the Church of Sts. Peter and Paul, Mur- tón Street, North Broken Hill. The funeral will leave the church at ll a.m. for the Catholic Cemetery.

Baker Sc Woodman have charge of the arrangements.