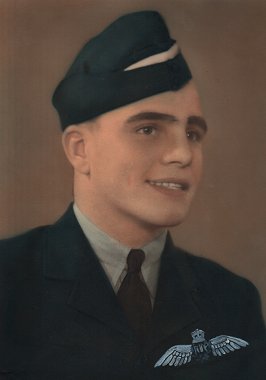 When Alec was informed he was being shipped to Melbourne, and then at some stage, would be shipped to Europe, he and Daphne decided to get married. They only had a day\'s warning, so that very evening he went and asked Daphne\'s parents for permission to marry the next day. They permitted the marriage. The next day, April 14, they went into town to the registry and got married. They then both went to Melbourne together and spent two weeks together before he was shipped to Europe.

From family history book: "Shot down during WWII in plane over Northern Africa. Landed unharmed but had his nose broken by the ripcord on his parachute"

At Daphne\'s 90th birthday she told the story of his crash landing in Sicily. The engine of his plane killed a local donkey. When he was discovered by locals he was worried that it would be a problem since donkeys were important assets for rural sicilians at the time. He made a promise that the Australian government would replace the donkey.

One of the villagers promised to escort him to an allied army base. He had to trust that the man would not turn him over to the Italian/German axis. He followed the man and was luckily returned to a New Zealand encampment.

Alec eventually was asked by a General to be his personal pilot, and so when he could have returned to Australia after his term of service came up, he instead stayed in Europe flying the General around - seeing a lot of Italy as a result.

After returning to Australia, he was asked to serve again in New Guinea, but Daphne and his family told him he had done his duty and not to go.

When he returned the only reason Daphne was aware he was coming was because one of his mates telegrammed her family. He arrived in Melbourne, where the returning boats usually disembarked, and - thinking the army would have notified family - arranged to get on a train immediately. His mate told him, as he was boarding, that he would telegram the family that he\'s on his way.

The telegram arrived at Daphne\'s family door. She said that families at the time were always worried about getting a knock on the door from the telegram boy, since it so often meant they were being informed of the death of their relative. Her father answered the door, luckily finding it was news of Alec\'s return.

She met him at the station the next morning, and that is where he met Janice for the first time (at the age of 3). A photo was taken by the newspaper of him holding her.

He returned to Italy with Daphne after the war, on holiday.

Cause of death: Aortic Annurism