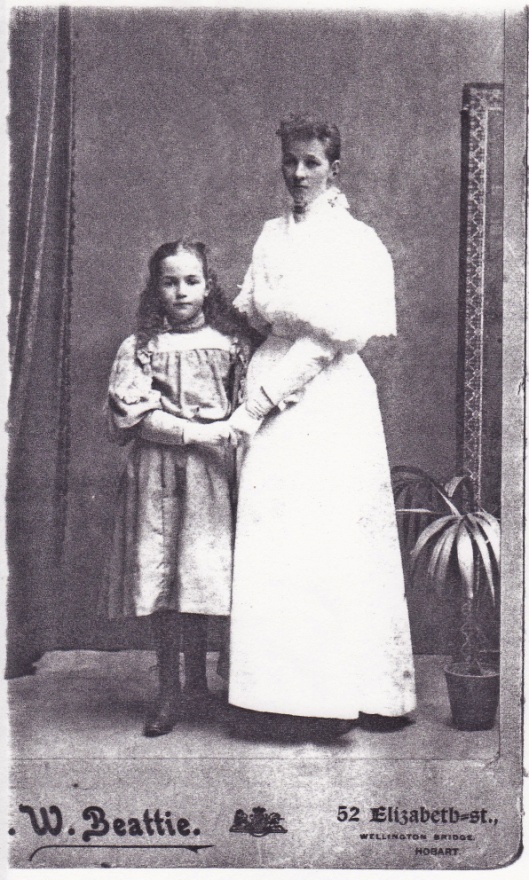 Bertha Louise KingstonI33
b: 4 Oct 1873
d: 1966
Biography
Bertha Kingston
Bertha Louisa Kingston was born at Bream Creek Tasmania on the 4th October 1873; she was the third child of Mary Jemina Payne and Charles Kingston.
Mary born 23rd October 1852 was the daughter of Charles Payne a convict and Mary Ann Richardson. She married Charles Kingston on 12th August 1869 when she was seventeen years old. The witnesses were Charles’ father and brother. Charles was the son of William Kingston and Ann Clutterbuck who arrived in Tasmania as a servant from India. William had arrived as a convict on the Woodman in April 1826, sentenced to transportation for theft, with another, of 15 pairs of shoes, 50lbs of leather, a punch and 2000 nails from the dwelling house of Charles Buckingham, at Hambledon, Surrey plus 140 yards of linen, cotton and silk, various items of clothing and a pistol from the house of Elizabeth Billinghurst in the parish of Witley, a few miles from Hambledon. He had originally been sentenced to death but the sentence was commuted to transportation for life. William was twenty three, a farmer’s labourer and ploughman, useful occupations in the colony then where ploughmen were in great demand. He married Ann Clutterbuck at St David’s C of E on 21st may 1832. Ann Clutterbuck was an interesting person; she arrived from Calcutta, India, on the barque Research as a servant of Captain Davidson who had two other servants with him, Haldy and Toby. Ann was at least part Indian, and a family legend claims she was an Indian princess. I was told that Granny often said that she was descended from an Indian princess.
Mary and Charles Kingston lived at Bream Creek where Charles was a successful farmer. Their property was known as Southend, and on the 1870 assessment roll Charles is shown to be the owner occupier of a cottage and 100acre farm with a value of £25. They registered twelve children four of whom died in infancy, and only three of the remaining children married.
Mary and Charles had twelve children:
Charles born 7th June 1970
Amy born 5th May 1872
*Bertha born 4th October 1873 (Granny)
Francis born 10th October 1875
Arthur born 1st May 1878
Ernest born 13th August 1879
Alfred born 9th October 1880
Archie born 4th February 1883 (Uncle Arch)
Cecil born 5th November 1885
Effie born 13th November 1887 (Aunty Hilda)
Olive born 14th November 1889
Frederick born 11th August 1892

The only ones I met were my grandmother Bertha and my Dad’s aunty Hilda who lived in Preston and was married to Dad’s Uncle Bert Hill. I also met Uncle Arch who had a dairy farm at Bundoora and who was married to Aunty Amy. During the 1950’s I stayed at that farm with my cousin Peter for a few days and had a great time.
The few facts I have of Bertha’s early life I got from her when she lived with Aunty Joy and Uncle Bob during her final years. She told me she lived on her parent’s 100 acre farm known as Southend she went to school in Bream creek and that she used to ride a horse to school. She went further to say that the horse eventually got too old for it to eat so he father shot it.
I subsequently found out that she went to Hobart and entered domestic service where she eventually met my grandfather Harry when she went to work as a housekeeper for him. As described earlier she married Harry and they had five children three of which who survived to adulthood.
(Dad, Aunty Mary and Aunty Joy)
Bertha as I mentioned earlier lived with Uncle Bob and Aunty Joy Cleeland in Preston along with my cousins Wendy and her brother Peter. Aunty Joy looked after Granny for many years until Granny’s final illness became terminal which required her to be admitted to full time care at Mt Royal Nursing Home in the mid 1960’s where she remained until her death in late 1966. She was cremated and her ashes are at Fawkner cemetery and can remain there as they are not subject to the twenty year lease rule.

--- FROM THE RADCLIFFE FAMILY HISTORY ANCESTRY.COM ---
Bertha Louise Kingston was the second daughter (3rd child) of Charles and Mary Kingston and was born at Bream Creek on the 4th of October 1873. On the 25th of April 1904, at the age of 30 years, she married Harry Witcombe and they had five children. Bertha and Mary moved out of their house, on which they owed money, during the depression years of the 1930\'s. This was a time of great hardship for many families and work was scarce. They moved to Melbourne to obtain work and most of their descendants still live in Victoria.
Facts
Ancestors
Family Group Sheet - Child
Family Group Sheet - Spouse
Picture Gallery