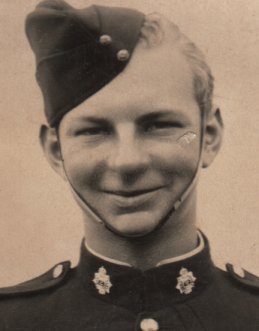 Educated at South Brunswick Elementary School and in 1925 was awarded the Merit Certificate (8th grade) - he was then aged 14 and left school to enter the workplace.

In 1935 he married Joy Hilda Witcombe and shortly thereafter Wendy and I arrived.

He was, first and foremost, a child of the depression. He was only 18 years of age when, in 1929, the financial system of the world collapsed.

Like many working class men, around the world, he found it hard to get work. But Bob Cleeland had a quiet determination - there was nothing he could not do.

His marriage certificate records that in 1935 he was a mechanic - in 1938, the year of my birth, he was admitted to the boilermakers society. He was also a carpenter, plumber and electrician.

Together with Jack Scott, my uncle, he built a house at Kats Ave, Kingsbury. The lot, plumbing, electricity, tiling, framing, foundations. It is, of course, still standing, and I wandered past it only the week before Bob's death.

Every motorbike or car I owned until I left home, dad repaired [CSPEL, Standard Vanguard]

He built caravans and trailers in his garage.

He taught more people to drive than I remember.

But his great love was his garage where every implement, tool or device he required was there. If he didn't have it, he made it.

In 1960 he was initiated into Masonry and raised in March 1961. He was then 49 years old. He remained an active Mason until age and infirmity prevented his attendance. He was twice Master of his lodge. Bob enjoyed the craft and was a proud Mason.

It was a pleasure for me to surprise him in 1987 when I was initated into the craft.

While he had his dissapointments he rarely expressed them. He was not an emotional person and kept his thoughts mostly to himself.

As his son I regret not knowing him better.

Above all else, Bob Cleeland was the most gentle human being I have met in my life. Wendy and I cannot remember him raising his voice or being angry with us. In fact I can recall only one occassion when he became physically angry. He gave Wendy and I all the benefit he could to enable us to advance our lives.

He was a physically strong, barrel chested man.

From family history book: "An aversion to ptotatoes because 'all I ever ate during the depression was potatoes'"

From Jason Cleeland
Poppa was a quiet man who could build anything. My memories of him stretch back to his and Nanna's house at 3 Frier Ave, Reservoir where he spent a lot of time in his large shed out in the back yard. He had made a fully fledged caravan, from the ground up, which eventually he and Nanna gave to Dad & our family for use. It was a silver 4 bed, and I tried to live in it for a while as a teenager.

The caravan went on many trips to Sandy Point with our family.

Poppa taught me to drive, and Fiona too. I always remember him as sweet and kind with a gentle attitude.

When my car's thermometer gauge broke he helped me to change it. When the bolt holding it to the engine block broke off I assumed that was the end of things. But poppa pulled out tools that could gouge the bolt out of the slot, gradually removing the broken bolt. In the process at one point he slipped and gouged a huge cut into his hand, but he simply wiped it with a cloth and continued on working .. stopping every now and then to wipe more blood off! Didn't hear him swear or say anything, it was like he didn't feel a thing.

His last car was an eight cylinder holden Premier, a very powerful vehicle. Dad eventually had to have his license cancelled because Poppa was getting a bit careless with his driving.

After Nanna died, Poppa started getting more and more forgetful, and eventually had to be moved into a nursing home in Reservoir (sometime in his early 80's). He had a tendency to go wandering, but he was well liked by the staff mostly because he used to maintain the gardens. He regularly mentioned, while living at the nursing home, that he wanted to buy a motorbike and ride around Australia!

As his mind slipped further, he had to be moved to a high care nursing home. Eventually he just lay there all day, not recognising anyone or even being aware if people were around him. Shortly after Lachlan was born I went to visit him with Dad to show him his new great grandson, but he didn't make any sign of recognition we were there. We took a photo of the four generations of Cleeland's together, but that was the last time I saw him alive.